I woke up Saturday morning not knowing that I would soon be off on a motorcycle adventure. (Honestly, I’m not even sure he knew we were going for a motorcycle ride.) The weather had been pretty dreary and drizzly lately, not exactly conducive to long open air rides up through tea country.

Fortunately his work schedule slowed down and the weather cooperated. Well…it looked like it was going to cooperate until we were halfway to our destination and big ominous black clouds loomed up in the sky. I think both of us were simultaneously bombarding heaven with prayers for sunshine. Me, because I was already cold and him…well…he had ulterior motives altogether. 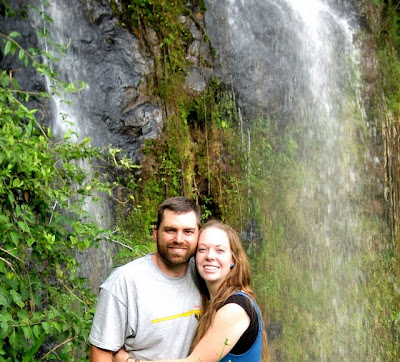 He changed course to avoid the impending storm and headed towards some beautiful tea farms he had visited once before. We parked the bike and wandered around the lush, green fields admiring lovely wild flowers and enjoying fresh air far from Nairobi smells and sounds. But for him this was just not quite the right place and so we moved on.

Back on the bike we saw an enormous, hand painted sign announcing a waterfall overlook picnic area dating back to 1963. We turned down the lane and proceeded to get bogged down in mud. Still hopeful he parked the bike and declared that we would walk the rest of the way!

Tromping through mud (ok it wasn’t really that bad) we encountered some “carnivorous canines”, a monster, male Ridgeback and his black lab companion. Happily they were well-behaved and barely gave us a second glance. 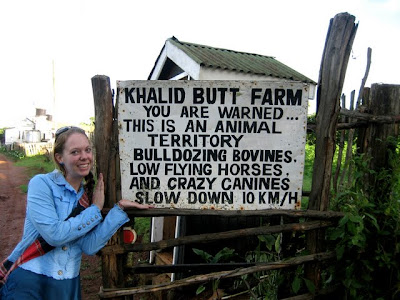 A few more paces and we reached the “Khalid Butt Farm”. A bit confused as to where the waterfall was we inquired from the non-English speaking Kenyan gardener. He pointed us onward and we followed a delightful, grassy path down towards the sound of rushing water.

One wrong turn later we reached the waterfall and boy was it ever stunning! The water cascaded down a sheer rock face covered in vines and small, purplish flowers. Upon descending the stairs we saw a gorgeous rainbow in the mist. 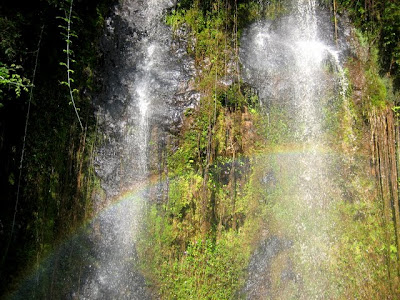 After a number of photos, he paused the photo-op dropped to one knee and declared he had an important question to ask while pulling the ring from his pocket. His “Will you marry me?” was followed by an adamant “Yes, of course!”

We never did see those “bulldozing bovines” or the “low flying horses” advertised. But in the end I walked away having seen the promise of God in a rainbow feeling truly blessed and loved. (Oh and with a shiny, beautiful ring on my finger!)